There is a show on the Fox network on Friday nights that I love called Fringe. Fringe’s premise is that there is a “parallel universe that mostly mirrors the prime universe, but with numerous historical idiosyncrasies. This parallel universe shows how small choices that you make define you as a person and can change your life in large ways down the line”. In other words, our worlds are filled with the same people but life is entirely different.

Ever since Alex was born I have always felt I wanted to live in another universe, one were people were inclusive and education was geared for all learners. In this alternate universe people of all abilities go to college, work, live where they want to live and have the support they need to live fulfilling lives.

The universe we currently live in is moving in this direction. People with disabilities are more and more accepted in their communities, special education has come a long way, and community based housing options are evolving.

This past week, although I walked around in my current universe for the first time in a long while, I felt like I was the alternate Gary. This other Gary does not fight for opportunities for Alex, nor does she bite her tongue to refrain from losing her temper (although this week I was not so successful). In this universe Alex realizes her dream to go to college, the right every person who wants to go to college should have. 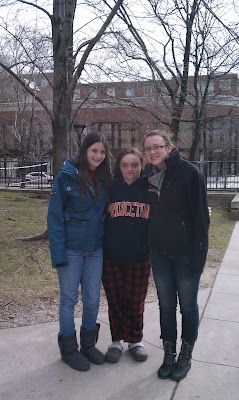 Alex wearing her Princeton sweatshirt at Penn!
Yes, this past week Alex and I went on a college tour, just like all her peers. We saw Princeton University, the University of Pennsylvania, Mercer County Community College and The College of New Jersey.


TO BE CONTINUED in the alternative universe