Everywhere I look I see circles.

I have talked in the past about circles, people who move in and out of our lives, deja vu experiences and circles of support. In past posts I have documented Alex's college search, shared her disappointment when she did not get into her number once college choice and our journey to matriculation at the University of Cincinnati. A circle waiting to be connected.

I firmly believe that disappointments are doors to opportunities and perceived setbacks are tangents to our true paths. We had no idea what would await Alex in Cincinnati, although we are from Chicago, our first tip to Cincinnati was for her interview. We fell in love at first sight, the city is beautiful, quintessential mid-western and the campus friendly and navigable. From the Midwest to the Midwest, a circle.

We knew Susan and April through our blogs and have since discovered there are other wonderful Moms ready and willing to led a hand if Alex needs help. My sister is an hour and half away in Louisville, so we felt Cincinnati would be safe for Alex.

But what I did not know at the time was that someone else I know from 35 years ago was also in Cincinnati, and that has made all the difference. Lisa and I went to college together and have not been in touch in over 30 years, but (and I hate to say this) reconnected through facebook. Those ties created so long ago in the beautiful Chenango Valley now circle my daughter, so safe, so loved and so far away from home.

Following is an email and some pictures I received this morning, printed with Lisa's permission.  I am so grateful we have been able to connect this circle.


Alex and I had a fun time yesterday exploring Cincinnati.  We arrived at Music Hall, a majestic building built in 1870, for a family concert and discovered the concert was NEXT weekend.  But lucky us, we found a friendly ghost.  Larry, a 62 year old building maintenance worker, popped his head out through the locked doors and ushered us in for a private tour.   There we were in the grand entry way and then in the big half darkened theatre.  Larry told us that he was a ghost. He said that the place was full of ghosts and all of them were friendly. 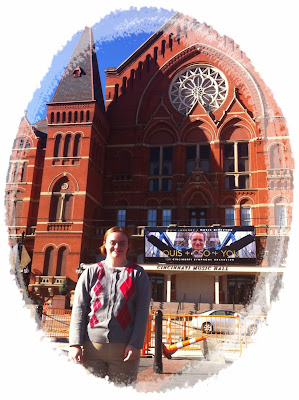 He said he’d seen all kinds of ghosts because he works nights, often sleeping in the building.  One night he was cleaning the front door windows when a co-worker gasped.  On a bench on the other side of the room there was a ghost dressed just like Larry.  Because he’s the friendliest guy on the staff, the ghost had taken his appearance to show it was friendly too.  He talked with reverence about his love for the place, meeting Muhammad Ali and, just last night, meeting Maya Angelou, who is performing this weekend as part of a Symphony event.  And of the last looks exchanged between him and 101 year old $100MM donor Louise Corbett as he was lifting her and her wheelchair into her box.  He said she looked at him with big round eyes that said, “I’ve had enough.  It’s time.” 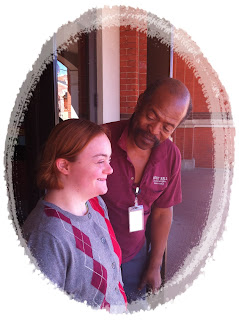 Leaving the theatre, Alex spotted a poster advertising a dinosaur exhibit at Museum Center so off we went.  She particularly loved the interactive exhibits.  In several, we danced and waved in front of special sensors.  The dinosaurs on screen came forward, looked at us and in some walked right over us. 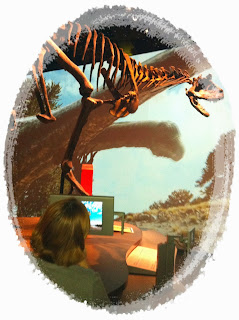 Then we did a lunch run (hamburgers) and a juice run to replenish the fridge.  As I feared, she’s already cut off all three pairs of sweatpants.  Holly has told her she can no longer cut her clothes and has forbidden her to wear them until they are hemmed.  So sewing 101 will be on our agenda after the concert next weekend.
************************************
If you have not liked our page, it is a good way to stay on top of the ups and downs of college for a person with a development/intellectual disability. I have no idea what is going to happen....but I will share the good and the bad. Please click on "The Ordinary Life of an Extraordinary Girl" now.