CONTINUED from the alternate universe
Yes, this past week Alex and I went on a college tour, just like all her peers. We saw Princeton University, the University of Pennsylvania, Mercer County Community College and The College of New Jersey.

In our current timeline (another theme that runs through Fringe) an Ivy League school is not appropriate for someone with developmental disabilities, but maybe sometime. However, these two colleges, which we saw first, as Alex’s sister goes to Penn and my family lives in Princeton, taught Alex what a college should look like. Alex wants a pretty campus, with a student center, dorms and lots of people walking around, all greeting each other and smiling. Princeton and Penn set the bar for Alex.

Alex, with a bit of help from her Mom, has identified two great schools with programs for people with developmental disabilities, as described in this previous post. The application for The College of New Jersey (TCNJ) was submitted in the beginning of December, including Alex’s transcript, five recommendations, her IEP and the five page questionnaire (completed by Alex). Mercer County Community College’s (MCCC) application had not yet been submitted, it is not due until after February 1st.

The reason for our rather quick college trip was the recent email from TCNJ and the Career and Community Studies Program (CCS). “Your application has been received; everything is in order and please come in for an interview”. We had the choice of a few dates, and took the first one, January 31st at 1 PM to be held in Ewing, NJ. Based on what we know about last year’s application process, this is the first hurdle, the committee looks over the applications and calls in a subset of the applicants for an interview.

Still walking in this universe but believing in the alternate, we continued our college tour at MCCC. Alex met the DREAM program administrator and counselor, and had an unofficial interview. During this interview Alex was quiet, and I went to get some “water” to see if Alex would talk more. Since I was eavesdropping I know she did speak more, but she was not engaged. She answered questions in a couple word sentences but was not the Alex I know and love.

After the interview Alex went on a tour of the campus with one of the graduates of the program, but again she came back uninterested. It took a while to discover Alex’s concern, and then she shared that MCCC did not look like a college, there were no dorms and it was not “pretty”. I tried to explain the difference between a community college and a four year college, but once Alex has made up her mind, she does not listen well.

The College of New Jersey was on the opposite spectrum. Alex fell in love at first sight. The day was crisp and clear, the campus beautiful and filled with students smiling and greeting each other, it was just like Penn and just like Princeton. A four year college for people with developmental disabilities does exist in this universe! 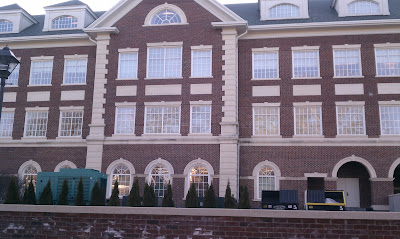 Alex's idea of a perfect college. A building at TCNJ﻿
I was not allowed to attend Alex’s interview, as it should be, so was able to spend an hour by myself wondering if shy Alex or chatty Alex went to the interview. Although in retrospect knowing how enthused Alex was about TCNJ my stressful hour could have been avoided. Alex ALWAYS engages when she is vested in something and she wants to go to TCNJ.

When I joined Alex and the two incredibly caring special educators who interviewed Alex I got the thumbs up. Alex answered all the questions and shared her many life experiences that help define who she is – riding, skiing, school sports and drama etc… All kids have special interests and Alex is no exception.

We were told Alex's interview was the first of a series to happen over the next six weeks, and then the acceptance decision will be made. But more importantly we were told Alex did very well in her interview and regardless of the decision from TCNJ Alex should absolutely go to college because she will succeed.

Our tour was given by three sophomores in the CCS program. They were confident, knowledgeable and their passion about the school was contagious. Alex was hooked as am I. 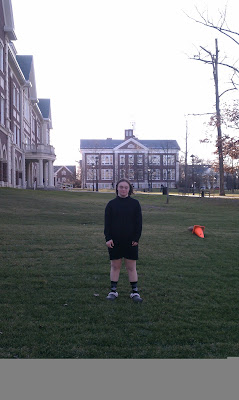 Alex at TCNJ
There is a show on the Fox network on Friday nights that I love called Fringe. Fringe’s premise is that there is a “parallel universe that mostly mirrors the prime universe, but with numerous historical idiosyncrasies. This parallel universe shows how small choices that you make define you as a person and can change your life in large ways down the line”. In other words, our worlds are filled with the same people but life is entirely different.

In this universe people of all abilities who want to go to college can. These future college students apply for college, have interviews and then wait for the letter in the mail with the decision, just like Courtney did and just like Tommy will.

In our universe, the one we live in everyday, Alex put her best foot forward, she shone, she shared her magic, and in six weeks we will know if it was enough. I sure hope so, I want this more than I have wanted anything for Alex! But most importantly Alex wants this, and has worked hard to create this opportunity for her future.