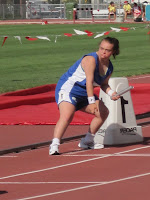 Alex’s last day of competition included the 4x100 relay and the 100M. These are her best events and we were excited for the competitions. My sisters Sue and Katie as well as John, Courtney Tom and I got to the stadium early to watch the races. It was the usual Nebraska weather; hot and humid and tough for the athletes.
Alex’s relay team consists of the four team mates; Aimee, Ben, Charlie and Alex. Alex is the lead runner, followed by Ben, Aimee and Charlie as the anchor. Charlie is one of those long and lanky runners and is VERY fast. Going into the last leg the team was in 5th place, but Charlie was able to overcome three of the competitors and Team Colorado came in 2nd place, this made my daughter much happier than the previous days’ results. A silver medal!!

On this fourth day of competitions the awards ceremonies got a bit delayed. After each race the athletes went in the air-conditioned building next door, host of the bocce tournament. However with all the events ending so close together the medals and times could not get assembled and presented very quickly. This meant the athletes had to sit inside for a long periods of time, and get pulled at for their next competitions. So far, this in the only glitch in the Games and very minor. However, Ben had to miss the ceremony as he went out to the shot put; this was unfortunate.

Alex’s next and final event was the 100M. I had been able to look up her division the evening before on the web site and saw she had eight in her division and she had the slowest qualifying time. Granted these competitors are only a second or so apart, but this put Alex in an outside lane which I knew was not her favorite.

Alex ran a great race and came in 7th, but the look of disappointment when she crossed the finish line broke my heart. I wished I could make her understand that she ran really fast and was competing against top runners. Why can’t she feel proud of her accomplishments and not be so focused on the gold? I know the reason is part of her intellectual capabilities; she sees the now and feels it very strongly. She will understand later about the times when I show her on the computer, but it will take awhile. Alex is competitive and hard on herself; as my sister said to me all week – apple: tree.

Alex held herself together for the award ceremony but wanted lots of hugs afterwards. Her coach left her with us for awhile as she could not stop crying. She told me “I could not take any pictures or tell anyone she got 7th”. This is not acceptable to me; Alex should be extremely proud of herself and her accomplishments. I will not honor her request.

I know after the evening’s dances, and team camaraderie Alex will feel better. After all, she got silver and a 5th, 6th and 7th in the National Special Olympic Games, not many of us can say that. It is a proud week for our family and we will relish these memories for a long time.