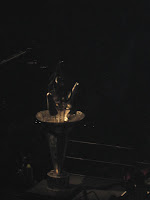 The Closing Ceremonies of the 2010 USA National Games were just as inspiring as the Opening Ceremonies but in an entirely different and positive way.

We arrived at the Stadium to find the athletes already seated. I must admit, at this point, we were okay to not sit through the 1 ½ hour of the State by State introduction of the athletes we had experienced at the Opening Ceremonies. The energy was just as contagious as the first day, and I could feel the pride on these 3,600 plus athletes.

The Closing Ceremonies included lots of music, a video recap of the week, the lowering of the Olympic flag and the dousing of the torch. It was one big celebration as evidenced by the dancing athletes and joy filled audience.

The difference in content was the introduction of Project Unify. This initiative is a youth led movement to activate young people across the country to become agents of change; to promote respect, dignity and advocacy for people with intellectual disabilities by utilizing the programs and initiatives of Special Olympics.

It was started by youths and for youths on the national and the grass-roots level. Local projects that meet Project UNIFY objectives are supported through grants for local Special Olympics Programs and funded by the U.S Department of Education.

The movement was introduced at the Closing Ceremonies by a charismatic young man who attends Notre Dame. He was also one of the founders of the spread the word to end the word campaign. This youth led campaign was established in 2009 during the Special Olympics Global Youth Activation Summit. Project Unify was established as the next step at the USA 2010 National Games Youth Activation Summit that was held in Omaha this past week. The presentation was well done and powerful.

As we left the stadium I felt thankful. Thankful we had been able to participate in the 2010 USA National Games and thankful for the Special Olympics. Thankful for the volunteers and the coaches.

I feel so positive about the future. I believe that someday soon, people with intellectual and physical disabilities will be more included in our communities. If we educate our children about acceptance and inclusion they will grow up to be adults who do not see differences in people; only promises. I am hopeful and optimistic.

As John says (quoting someone else) – “It takes a village”, I want everyone I know to be part of that village. Come join us.