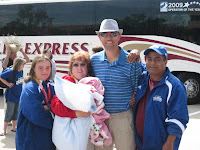 We had the pleasure of attending the Lincoln Salt Dogs vs. the Wichita Wing Nuts minor league baseball game while in Lincoln. The game was in the beautiful Haymarket Stadium with a warm breeze and comfortable seats; a really nice way to spend the evening. Unfortunately for the locals, the Salt Dogs lost 5-4 in the 9th inning.

While at the game, I overheard a conversation between two men who had volunteered at the Special Olympics. They talked about how inspiring the Games were and bragged about their events. One of the gentleman said he thought all athletic teams could learn from the Special Olympic athletes. His words were something to the effect of “I wish the Special Olympic athletes could teach regular athletes about sportsmanship and competing with happiness.” Of course, with my new extroverted personality, I immediately chirped in and bragged I was the mother of a Special Olympian. They were dutifully impressed.
This exchange reinforced something I have felt for a long time, tried to articulate at times, but need to reiterate, the Special Olympics would not be what they were if it weren’t for the hard work and dedication of our Coaches. These volunteers spend countless hours working with the athletes, and in the case of Alex’s coaches celebrate her successes, but also deal with her disappointments.

Alex’s coaches at home are Paul and Cammi; they have known Alex for almost four years. They have built a great relationship, supporting Alex when needed, but also working with her on good sportsmanship and appropriate behavior. At times they have been tough with her, and she has pushed back, but this is necessary with Alex. Especially when she is not a gracious fourth or fifth place winner. She looks up to them and respects them; they are part of her family.

Coach Larry is the coach for Alex and her three track and field teammates at the National Games. The coaches were chosen by lottery and experience. Larry has been involved with the Special Olympics for seventeen years; as a parent and a coach. He spent a weekend with the athletes in April and then met up with his team on the bus to Lincoln. I cannot imagine a harder job, melding four athletes who do not know each other or the coach, into a cohesive team. Larry did this.

It has been such a pleasure to see how Alex’s team supports each other. When Alex was disappointed over her finishes the team rallied around her and encouraged her. Larry told her she should be proud and she had done a great job. When I tried to tell this to Alex she cried and whined. I should have just stayed away and let the team philosophy play out. I only made things worse, and learned to stay away. Alex listens to her coach, not her mother, which is the way it should be.

Larry took a week’s vacation from work, and away from his family, to spend the week in Lincoln with four athletes he barely knew. He juggled schedules; both for the athletes and the parents, and kept our kids energized and excited. He made sure the athletes stayed hydrated, fed and slept well. He also dealt with crying (Alex), disappointment (Alex) and painful bug bites (Alex). He was smiling whenever we saw him, communicated with us as needed, and was the best cheerleader there. Team Colorado had an awesome Coach in Coach Larry.

These selfless volunteers who coach for the Special Olympics are our unsung heroes. They are proud of their athletes, yet humble about what they do. An incredible group of people; we should all aspire to be as extraordinary as a Special Olympic Coach.