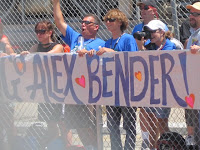 I really am not a fanatic fan. I do not wear shirts that advertize where I am from, or tote signs with my daughter’s name. Generally, I like to keep a low profile; an observer rather than a participator. But this week, something huge has happened in my life and I am celebrating. All my introverted personality traits have gone out the window. I am the biggest fanatic fan I know and am proud of it. Even my other kids and husband (who does share my personality traits) have joined in the celebration.
If anyone had told me 17 years ago that I would be in Lincoln, NE with my daughter with down syndrome representing the State of CO in the National Special Olympic Games, I would have told them to get lost. I hope I was gracious with those well meaning folks who told me they knew someone, who knew someone, who had a child with down syndrome and shared stories of bright and promising futures. To be truthful, as well meaning as these folks were, it got old fast. John and I needed to research and learn ourselves about our newborn daughter’s future. Turns out these well wishers were right.

Alex got a 5th out of 6 in the shot put and 6th out of 6 in the 200 M run in the finals today. She was disappointed, almost angry. She did not consider all the hard work that brought her to Nebraska, all the events she won, all the shot puts she threw. She did not take into account that she qualified with personal best scores; throwing her into more competitive divisions. Alex did not think about the fact she was competing with the best athletes in the country. She only thought about the fact that she did not win a medal, merely a ribbon.

Alex proudly stood during the awards ceremonies, accepted all the congratulations from her teammates and then asked us to hold her ribbons. She would not look at me however, and hid her face from my camera. Alex does not want to wear a 5th or 6th place ribbon, she says she is embarrassed.

I, make that we, could not be more pleased and proud. We know how hard Alex worked. We know the heat and humidity of Nebraska Is not something Alex has experienced. We know the bug bites on her ankles hurt and the excitement of the entire event can take its toll on the athletes. We know Alex is probably not sleeping enough and trying as hard as she can to be an active participant. She is probably over eating.

We are not embarrassed; quite the opposite, we are honored. Honored to have Alex as our daughter, honored to be a part of the National Special Olympic Games and honored to be raising such an extraordinary girl!