A is for Actress 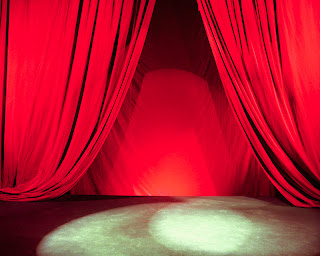 Alex’s performance addiction has gone beyond music to the stage. She has landed herself a part in the school play, again!

Last year when Alex wanted to try out for the play I had to intervene - talk to her teacher and ask that her teacher talk to the director and on and on. The bottom line was Alex got a part. The play was "Murder Cafe" and Alex played the waiter who turned out to be the murderer. Adaptations had to be made for her part, so she shared some of the speaking lines with her friend Tory. As expected, the audience loved Alex and we were the very proud parents of an actress.

This year Alex did not even tell me she was trying out for the play. I had no idea that she had talked to the Director and her teacher and finagled a try-out. So now, she has football practice some days and play practice the other days – at this rate she will never have to ride the school bus again. But, I love it when she is independent!

The play this year is “Big Bad” which looks to me like a compilation of a number of Grimm’s fairy tale characters. I had to ask Alex if I could look at the script, as she was having a bit of difficulty explaining it to me. I do want to spend some time talking about Alex’s speech – but it gives me anxiety even thinking about the battles I have had trying to get her speech services in our rural school district. So I am avoiding this issue for now.

Alex has decided – and I am sure the Director does not know this yet – that she is going to play one of the three pigs. She wants to be pig number one – the “very stupid pig”. I am not sure why she picked this particular pig and it does concern me that stupid is in her character description. But, I know at times I can be over sensitive and over react.

As Alex left this morning, sharing with me her unbelievably, awesome, pig snort – I wished her luck. In my mind, I wished the Director luck too – after all who can possibly say no to a very cute 16 year old girl with Down Syndrome!