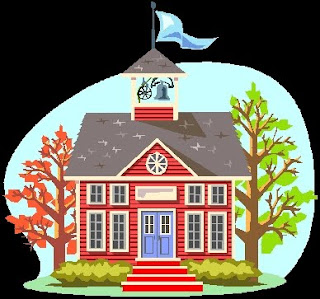 After Alex attended the zero - three - PIE program she was eligible for the ECP program - early children program. As with the PIE program this was a cooperative of the 17 or so school districts in our area. The program was held at an old high school that wasn’t being used. Strangely enough this was the high school that John attended. He felt like he had gone full circle.

The program was half day and Alex received the therapies that had been identified for her - primarily speech and some occupational. Basically, it was a special pre-school where the very talented teachers would work with the kids on more cognitive types of activities and have lots of one on one attention.

Since the location was about ten miles from where we lived - Alex was picked up and dropped of by a bus every day. After the first year the program was moved to a location much closer to us - which was great. She was still bussed – but it gave us the opportunity to also enroll Alex at the local pre-school that Courtney had attended. At the same time we made the conscious decision to hold Alex back. So she started kindergarten when she was six.

We wanted Alex to be able to meet more local kids so I felt the local pre-school was a great option. Courtney had an incredible experience there - so I was confident when I approached the Headmistress. She was encouraging and supportive and we enrolled Alex. This was the first time I had involved Alex in a "normal" setting and it was a very positive experience. Since she was a year older than the other kids there really was not that much of a delay in her abilities - and I really did not feel this until she hit first grade.

The Early Childhood Program allowed for this dual placement. For two years Alex went to nursery school in the morning (three days week one year - and four days a week the final year) and ECP in the afternoon. Although she was very tired every evening, this was one of the best times of her educational life. I miss those dedicated professionals and passionate parents.

It was a great program, and a great compromise between a "special" and a "normal" experience. I must admit I became spoiled. Alex was getting everything we could possibly imagine, she was making lots of progress and she was making "normal" friends. Wow - I thought - all my worrying for naught.

I have only good memories of the early years - the ELP program was great and made a positive impact on Alex and on us. I attribute much of Alex’s current success to her early programs. I know this program has changed in terms of services and time allotted - and it is a shame. The more our kids with special needs can receive early services the better it is for everyone.

When Alex was five she graduated from the nursery school as well as the ELP - we were going to kindergarten and would transition to the local school district. Life as we knew it was about to change dramatically!