From that day on, and until we left the Chicago area, NADS, as we call it, became the most important resource in our life. NADS, despite the use of national in its name, is a Chicagoland based not-for-profit providing support for individuals with down syndrome and their families. The rest of the post can be found here:

Every other year the National Association for Down Syndrome has a conference in their home base of Chicago. Until 2006, when we relocated from the Chicago suburbs, I volunteered or attended every conference. The bi-annual conferences were full of information about resources, the latest news related to down syndrome and most importantly other parents.

Alex and I went to the 2012 Conference as documented here.

We have never lost touch with NADS and the people who were so important to us when we lived in Illinois. I have written in the past of Sheila Hebein, the past Executive Director of NADS who taught me the first important lesson on life with a child with special needs - "She's a baby first".

Sheila knew Alex was selected to got to the Winter Games and asked me to provide some information for the NADS newsletter. The newsletter appeared in the our mail yesterday, following in an excerpt. 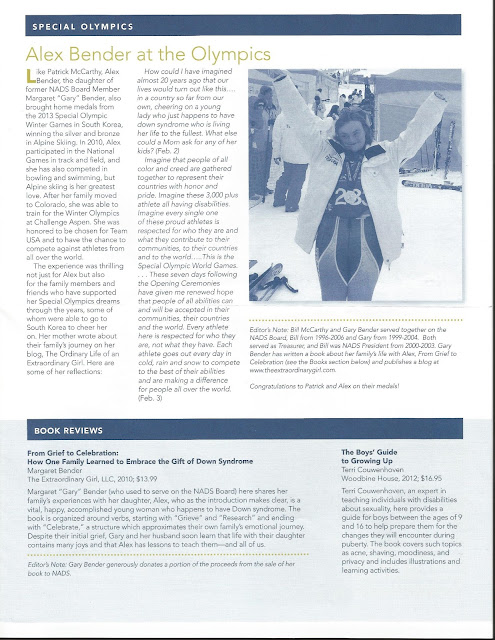 Thanks to NADS and all our first friends in the Chicago area. You have made all the difference