Voting is a right for people of all abilities! 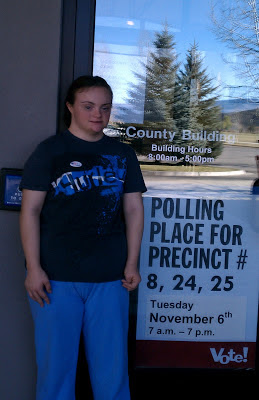 As I sit here with Alex and watch election returns it is hard for me to believe that people with disabilities did not always vote.  It was the American with Disabilities Act and its provisions that reaffirmed that American citizens of ALL abilities have the right to vote. And more recently  laws have been overturned stating that people who have legal guardians can not vote.

As Alex's legal guardian I believe it is my responsibility to make sure she votes. My job is to provide information about the candidates and the issues in a way that makes sense to her. We talked over the issues including a funny conversation about a CO State amendment legalizing the personal and recreational use of marijuana. We talked about the candidates and their views and we discussed that voting is an important part of being an American.

Today Alex exercised her rights as an American and voted in her first election. She was proud, independent and was met with smiles by everyone in our polling place. She signed her name, showed her ID and took her ballot with poise. And as with all things Alex, she took her time on her ballot and made sure each box was perfectly filled in.

As I sit here with Alex and watch election returns I know her voice and her vote are just as important as anyone else's.  And just like millions of Americans tonight, Alex is glued to the TV and is counting electoral votes. Alex is completely vested in this election and as she watches the returns come in she is nervous for her candidate, just like me, just like you and just like America.