Alex has thick light brown hair, beautiful green eyes and a smile that can light up a room (braces helped). And like all three of our kids, she inherited some of these features from her father and some from me (the need for braces).  One thing Alex also inherited from us is an inclination to enjoy food. 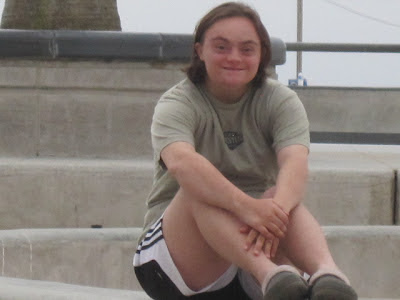 Alex has a slower metabolism than John or I, and she does not monitor her food intake as we do. This began to manifest itself around puberty and has been a challenge throughout high school and now post high school.  She is currently 30 pounds overweight and it is unhealthy. If I had a dollar for every person who told me that is was okay for people with down syndrome to be overweight because that is “the way they are” I would be in a better place financially than I am now. There is NO reason in the world that Alex cannot be fighting weight, after all she is a world class Special Olympian, – it is all about the approach and how she learns new behaviors.

I wrote the following in February, 2011:

Alex shares my love of these awesome dietary supplements, however, I understand portion control, and Alex does not. I am of average weight and Alex is at least 30 pound overweight. It affects her stamina, mood and clothing choices. Alex will overeat whenever she is alone in our house, or thinks I am not paying attention. We have had many a screaming match and I have not been able to alter her behavior.

I no longer buy any of my favorite foods, which also penalizes my very skinny 15 year old son.
I am disappointed and disgusted with myself over this. I obviously have approached this incorrectly and have a new plan in place. General Mom has entered the war zone and is ready to take over. Good thing I am a Gemini!

Like all good generals I tried a couple of different plans before I settled on the one that will bring me an honorable victory.

Plan 1 - Enlist a talented and successful Lieutenant who specializes in this type of warfare, Jenny Craig. My recruitment strategy was to help Jenny understand this war was an opportunity for exposure to a population she had not worked with before. I explained that many young adults with special needs are overweight. I suggested that the structure, counseling and prepared food tactics of her fighting style would be an easy win for a person (Alex) with disabilities.

I asked Jenny if it made sense to work with a person with disabilities as a test case - win one war and other generals would hire her. I asked if a Valerie Bertinelli of down syndrome could help grow her business. Jenny graciously agreed, said she would think about it, but in the mean time I needed to pay her $800 for the set-up costs and two weeks of food. I realized right away I could not afford this lieutenant.

Plan 2 - Work with the enemy, convince them you are on the same side. So, I asked Alex to prepare a chart of her ideal meals. Although her choices are not completely healthy, they do document portion control. Plus, she does not realize it, but this small victory on my part set me up to draft a complete battle plan.  READ MORE

Alex was quite successful at Plan 2 and lost ten pounds in two months.  She felt good, looked good and delighted in how clothes looked on her. However, I made a very rookie general mistake, I assumed I had successfully changed Alex’s eating habits and I had not.

Reinforcements in the battle zone is one of the keys to learning for Alex and I had stopped, thinking I had won the war. Although, Alex still saves half of her restaurant meal for her lunch and checks her weight on the scale, she has gained back about seven of those lost pounds. This is not healthy and will impact her future if we do not take decisive action.

Therefore, I have revisited my battle plan and reverted to Plan A, enlist lieutenant Jenny Craig.  On a trial basis, I enrolled Alex for a three day package of Lieutenant Craig’s battle plan, her food ($39.99). I asked Alex to participate in the battle and set-up the plan on her IPad by figuring out her ideal meals if this tactic is successful.  She has taken this to heart and is excited about the concept of “her food”, and no one else in the family will be able to touch “her food”.

Coincidentally enough (as there are no coincidences in my world) our refrigerator broke two days ago, and since I do not have a dollar for every person who told me that is was “normal for Alex to be overweight” we will be waiting a bit for a new fridge (unabashed plug to buy my book).

So as of now we have NO food in the house for Alex to snack on, sneak for or otherwise overeat, and will be an added incentive for Alex to embrace Lt. Jenny. This was an unplanned tactic in the war against weight, but may promise to be a very successful one. Just need to figure out how to feed my very skinny 17 year old.

If this partnership is successful we will sign up for the next package and purchase the food at about $140 a week. Jenny are you sure you do not want a cute 19 year old with down syndrome as your next model? It would certainly boost your business.