What is a friend?


Unable to answer these questions this favorite post is about one of my favorite people and illustrates how important friendship is to everyone, and how we all learn from our friends and embrace all of our differences.

It was published November 19th, 2009 and is called Sarah Berra. 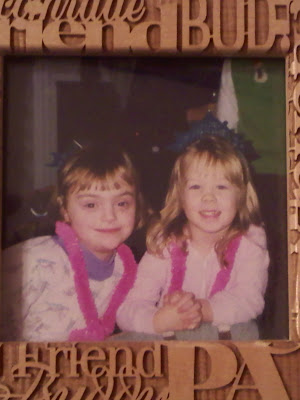 She goes by many names; Sarah Berra, Sare Bear, Wheeties, Sweetheart, Sweetie Pie, Big Sister/Little Sister and the list goes on. But, the name most important to me -  Alex's best friend.

Sarah was born when Alex was three years and 10 days old. She lived across the street and three houses away. Her parents are our great friends the As. She is one of the most amazing people I know. This is a tribute not only to Sarah, but to her parents, who are raising this remarkable person.

I am not sure what our lives were like before Sarah, as it seems like she has always been around. We first met her when she was 48 hours old and fell in love with her. I know this is impossible, but Sarah and Alex became best friends at that first meeting, and they grew together.

When Sarah was two and Alex five, they became inseparable, and spent every available minute together. This even involved crossing the street without parental permission. We would hear the doorbell ring and there was three year old Sarah - all by herself!

The girls loved crafts and I could keep them occupied for hours at our kitchen table. Alex and Sarah had constant sleepovers, and spent many an hour in the basement at the As playing dress-up. It was a given that they were best friends, and spoke of each other with pride in this title.

The three year age difference level set the girls for a long time. It was not until Sarah was about five and Alex eight that Sarah’s brightness and Alex’s delay inverted the age difference. Sarah did not notice, or even if she did, she did not mind. This only strengthened the friendship and Sarah’s loyalty to her best friend.

I have many a fond memory of some of the girls’ antics, such as the day they decided to cut each other's hair. Sarah being much more proficient with the scissors was able to do a fairly nice job on Alex’s hair. Sarah however, looked like a buzz saw had attacked her bangs. It took quite awhile for her hair to recover. All we could do as moms was warn about the dangers of scissors, laughing through our lectures.

As is the case with most households with small children – there were the markers on the walls, the paints on the clothes and the play dough stuck to everything. Although these two girls protected each other, I know they did their fair share of damage to our house as well as the As. All part of growing up - I almost miss those days….not really.

The As moved to a different town when Sarah was about six. At first I was heartbroken about this, but after I called them “poopy heads”, very mature I know – I felt better. I drove between their new house and ours every way possible to find the shortest route. I got it down to sixteen minutes, and this was acceptable to me.

In retrospect, I think the girls’ relationship grew even stronger with the distance. Sarah is smart, poised and has a great sense of humor. I believe that moving to a new school gave Sarah the opportunity to meet new friends and develop relationships with girls that were similar to her. This is necessary for a "normally" developing girl and teenager.

I also believe, this gave Sarah the opportunity to grow and mature, and understand Alex. In many ways, that made her friendship with Alex that more special. The girls still had sleepovers, or perhaps entire weekends over. They played and laughed and sang and danced for the next four years. It was perfect.

When we decided to relocate, we had a number of months to say goodbye to our friends. We spent lots of time with Sarah and her family. I should interject here; Sarah has an older bother who is very close to my son Tommy. They were also a part of these sleepovers and many a girl/boy battle was fought. We would compromise and on weekends, one family would take the boys and one the girls. Tom misses Charlie.

As excited as we were about the move, I had much sadness about leaving the As and their kids behind. My last memory of leaving IL involves Sarah. We were at my in-laws house saying good bye and the As came over for the final hugs. Sarah was so upset she hugged Alex as hard as she could and would not let go. She cried, I cried and Alex cried. I was able to hug Sarah hard enough to pull her away from Alex and hand her to her Mom – this almost broke my heart.

Sarah was able to visit us the first winter we were here. She flew out on a plane all by herself, took ski lessons and fit into our family like she never left.  Sarah has visited twice during the summers with her family. The girls still talk on the phone, although not as much as they used to. I believe, actually I know, these bonds that the girls formed, literally from Sarah’s birth, will last forever.

Last week when we were in IL, Sarah was there for Alex. Alex spent two nights at her house, and although the developmental growth between them is now fairly wide – Sarah does not care. To Sarah, Alex is Alex, her BFF. Sarah comforted her, they played and laughed and sang and danced.

I hope that every family with a child with down syndrome or other special needs has a Sarah in their life. People like Sarah make all the difference. She has given Alex unconditional love, and accepts her for who she is, and not what she has. Sarah is patient and kind, forgiving and understanding. She has taught Alex what it is like to have a best friend, I am not sure this would have happened without Sarah. Every child, whether or not they have special needs, deserves a best friend. Sarah has changed all of our lives for the better.

Sarah is very special - not only is she Alex's best friend, I am proud to say - she is my friend too.

UPDATE - Sarah and Alex are still best friends, but now I am trying to get my 16 year old son to entertain an arranged marriage....so far no luck.

Please check out these other awesome blogs: