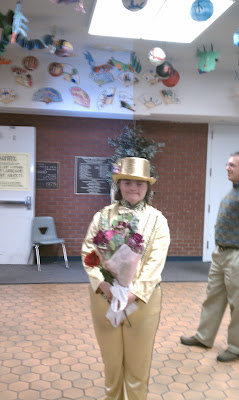 For the last six weeks Alex has been in rehearsal for her role in the high school production of “A Chorus Line”.  The last two weeks involved late night rehearsals and Alex was getting home way past my bed time, as well as hers. She was exhausted.

Alex has the ability to listen to her body, a body which does not succumb to threats, bribes or other requests to get out of bed and go to school. She is unable to function when she is exhausted, and this manifests itself in many ways, including a bad day at school and non-compliant behavior. I must admit I am much the same, the only difference - I decide to torture myself by pretending I am not tired, Alex chooses not to, or perhaps she cannot.

For the last few nights of the play rehearsals Alex went to bed at 11 and as a result would not get out of bed for school. Knowing what I know about Alex, her body and the torture she would inflict on every single person at the high school, we agreed to let her stay home from school for two of these days. This is contrary to our usual approach with Alex, which is always to treat her as we treat her siblings, but as they say, we have to pick our battles.

Anyway, back to the play….Alex loves to be involved in theater and sports, and we have asked that support for Alex to succeed in extracurricular activities be built into her IEP. We were successful having this included, but the execution of this has been spotty, particularly around basketball (for the long saga, search “basketball”).

For the last two years however, Alex’s speech therapist has been actively supporting Alex in learning and articulating the lines for the fall play. Additionally, as with everything Alex does, a few of the students in the productions have always stepped up to the plate to mentor Alex. This mentoring is sometimes facilitated by the director, and sometimes not. It takes a special director to include, and welcome a person with disabilities in a theater production and we have been quite lucky.

The spring play at Alex’s high school has always been a musical. In the past Alex has shied away from trying out. Perhaps she is intimated by the singing or dancing, although she participates in the Challenge Aspen musical every year for people with disabilities. Perhaps she is more comfortable in an environment here she feels she can shine and recognizes her talents are different than those of her peers. I do not know, but my guess is confidence must be a part of her reluctance.

This year, Alex’s fall drama coach (one of her biggest fans) encouraged her to try out for the musical and with his encouragement Alex gained the confidence to audition.  Call me nervous or battle worn but when Alex has the opportunity to participate in something new I get nervous. Will the kids welcome her? Will the musical and choreographic directors know how to include her? Will she feel different and isolated from the cast? The questions go on and on, and my shackles go up.

I am happy to say, that once again I devoted my worrying energy in the wrong direction. I did get early phone calls from the two directors, and they were very honest in voicing their concerns. I was equally honest in voicing my confidence in Alex and her ability to do anything successfully when she is welcome, included and supported. I did get the “we do not have enough resources to work independently with Alex” and I did give the “give her a chance and believe in her” speech.  And that was it….

During the five month period from these first phone calls, to the production in May, the musical director was communicative, brought concerns to my attention and everyone worked together to make this a successful experience for Alex, and the students. And as I said, I should have worried about something else, like life after high school……

Alex was given a role that did not involve dancing, as she was quite adamant she did not want to dance or sing. She was given a “new” role as the assistant to the assistant to the director. She had minimal lines, but always felt as if she was an important part of the act. The huge success however, was cajoling and convincing Alex that she could dance, and seeing the talent that was in this show, I know that was not an easy feat.

Alex participated in the last dance of the show “Bows” and from my very humble perspective danced her heart out and participated just as much as any other cast member. This did not happen by itself. Alex, Tim, Brooke, Owen, Katie, John, and countless others all contributed to this success. And if these exemplary people taught even one person, whether it was a cast or audience member, to believe then they have made a difference. Thank you!

It was truly “One Singular Sensation”. Video to follow.