The girl who cries wolf 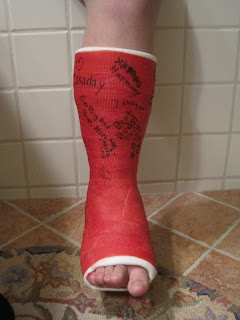 Alex has an injury related excuse for everything. If she does badly on a test, her eyes hurt. If she is late for school, her back hurts. If she doesn’t clean her room, her arm hurts. The list goes on and on, every part of her body is responsible for some type of behavior. Although annoying, in some ways, I applaud her creativity, or perhaps lack thereof, in making excuses.

Injuries are Alex’s coping mechanism. She might have done badly on the test, because she did not study. She is almost always late for school, as she operates on Alex time, which is slower than school time. As far as cleaning her room, no one in my family likes to clean their room. They certainly did not learn that from me, or did they?

As I have mentioned before during basketball season Alex has more injuries than I can count. Her wrist, neck, shoulder, knees and ankles have suffered a myriad of sprains, twists and aches. All of these complaints miraculously heal within 24 hours. I call these injuries the “lack of play” injuries, which helps Alex explain her lack of play to her peers. Once again this is quite advanced; I did the same thing in high school too. Alex feels excluded and angry when she does not play in the games, and despite her coaches promise to play all the girls, she does not play. She copes in the only way she knows how.

A few weeks ago, or January 27th as Alex likes to remind me, Alex rolled her right foot at basketball practice. I know she was hurt when she got in the car, because she was REALLY complaining and crying. We iced her, gave her tylenol and decided to wait it out. We call Alex the girl who cries wolf, and although I try not to ignore her complaints, it has become common practice for me. We go to the doctor at least once every other month, as I learned my lesson with her pneumonia scare, but generally I do not pay attention to any of Alex’s complaints until a week has passed.

A week later Alex was still complaining and her toes had turned a deep color of blue. Her entire foot became bruised and swollen and her limp more pronounced. She was acting out at school and it became apparent she was in real pain.

We went to the doctor, who we have visited on numerous wolf occasions, to have the foot checked out. The doctor, who has completely gotten Alex's number, suggested we wait a week to see if the injury got any better. This did not work with Alex or me, we were not going home without medicine, an ankle wrap or affirmation she had hurt herself. So, off to the xray we went, and yes my little wolf has broken a bone in her right foot.

Alex received a cast the same day. She can not play basketball for the rest of the season, which I’m sure makes the coaches very happy. I no longer have to be in their faces about sportsmanship, which makes me happy. In the back of my mind, I feel the bad basketball mojo got to Alex and the universe tried to solve her problem in an acceptable fashion

However, Alex will miss the rest of the ski season. She will not be able to compete in the regional Special Olympic competition, or the State Games at Cooper Mountain. Alex is very upset about this, the Special Olympics is where she shines, and she loves those gold medals. I have promised to let her attend, which means lots of driving on my part, but I can not handle Alex’s broken heart. Next time I hope the universe is more considerate. Sometimes things are just so unfair.

The girl who cries wolf has a big red cast on her right foot. Cry away my extraordinary daughter, I will always believe you.