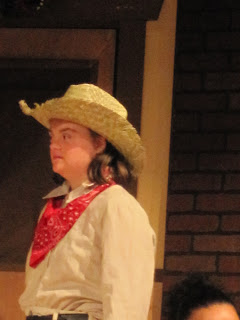 First things first, the name of the play was “You Can’t Stamp out Love”, not "You Can't Hurry Love", like I thought. I am not sure if I misunderstood Alex, remembered the name incorrectly or Alex told me the wrong name. When I asked, Alex responded incredulously, “Mom, I told you the name was “You Can’t Stamp out Love”. She acted like only I could make such a mistake. I beg to differ, but then again Alex is almost always right. She will not answer a question if she is not completely sure of the response. Her version of “I don’t know” is “I don’t want to talk about it”.

“You Can’t Stamp out Love” was a comedy. It took place in Loveland, CO in a hotel named the Sweetheart Hotel, and was built around puns, sarcasm and play on words. Starting with the name Loveland, there was a cupid, a match maker, a deceased gold miner, his disputed land and various other characters. Alex had two parts, the pony express diver, and a townsperson. Her nine lines were delivered on cue and flawlessly. I realized after the second performance some of the humor was so clever, I needed to see the play twice to catch it all. Twenty dollars well spent!

Alex’s first lines were delivered as she trotted into town as the pony express mail deliver. Her horse Mohawk, who she made at camp this summer, was her transportation. In delivering the mail to the hotel Alex pulled a few cards out of her satchel. She read each card to determine the address, imagine my surprise as my sweet daughter who has never uttered a questionable word in her life, looked at each of these cards and said -” Burp, no, Spit, no, Fart, no".

I am so surprised Alex was able to deliver these lines without cracking up. Anytime in the past when we let a not so good word fly in our house we laugh. We are not a swearing family, at least out loud. But, I sure think lots of swear words in my head; just try not to share them.

Alex came off the stage with that big smile I love so much. She hugged us, high fived her Directors and cast mates and showed a pride in her performance that humbled me. This was not an easy thing for Alex; memorizing lines, socializing with her peers and staying focused every day at practice. I am so proud of her and thankful to the community that included her.
I learned one more thing at the performance…I suck (maybe I will add this to allowable words in our house along with burp, spit and fart) at video taking. The enclosed clip is short and missing the entire scene. Next time I will hire a professional, my 15 year old son Tom!