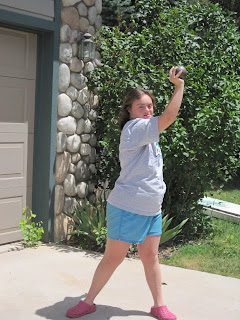 Basalt Special Olympian to compete at nationals
Jon Maletz
The Aspen Times
Aspen, CO Colorado,
BASALT — Margaret Bender likes to joke that she never could have envisioned being the mother of an Olympian.

That scenario has become a reality, however. And Friday, she and a large contingent of family and friends will travel to Lincoln, Neb., to cheer on 17-year-old Alex, who will be representing Colorado in her first Special Olympics USA National Games.

“Lincoln, Neb., wasn't necessarily the first place [siblings Tom and Courtney] thought about spending their summer vacation … but we think it's so cool Alex has accomplished this.”

Alex, a junior at Basalt High School who has Down syndrome, secured her spot at nationals, which run from July 18-23, with an impressive showing at last year's Colorado Special Olympics Summer Games in Greeley. There, she won gold medals in the 100-meter dash and the softball throw.

Alex followed up those efforts with second-place state finishes in the 100, shot-put and 4 x 100 relay earlier this summer.

Her bid for a national title begins with qualifying on Monday and Tuesday at the University of Nebraska's Ed Weir Track Stadium. She will be competing in the 100, 200, 4 x 100 relay and the shot-put.

“I'm so proud she has this opportunity to represent Colorado,” Bender said. “It's really a life event for her.”

One that took shape in 2006, when the family moved from Chicago to Carbondale. Soon after, Alex joined the Roaring Fork Mountain Niños, an organization committed to creating recreational, training and competitive opportunities for youth with developmental disabilities. Ten athletes from Parachute to Aspen currently work with the Niños, Bender said.

In addition to competing for the Longhorns' junior varsity soccer and basketball squads, Alex has developed a knack for track and field events. She is also an accomplished slalom skier who, just four years after picking up the sport, won two golds at the state's Special Olympics Winter Games at Copper Mountain this past winter.

“She skis better than me, but that's not too hard,” Alex's mother joked. “She's a really good athlete. To be truthful, when she has male instructors she does really well, like any teenage girl.”

Alex took part in Team Colorado training in April at the Olympic Training Center in Colorado Springs. She is one of 28 Colorado athletes who will compete in Nebraska, Bender said.

Alex will have quite the cheering section.

“When a baby is born with special needs, you just don't know what life is going to be like,” Margaret Bender said. “There are milestones along the way that you are so happy about and so proud of, but this is sort of beyond my expectations.

“I have faith Alex can do anything she wants to do in life. She's very determined and very motivated.”