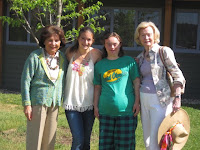 Courtney graduated from High School yesterday; it was one of the most rewarding moments in my life – to date. She has her whole life ahead of her, and I could not be more proud of the mature, intelligent and beautiful person she has become.
My mother, mother-in-law, sister and aunt all made the trek to the mountains to attend this incredible event. It has been a whirl wind of activities, and I am tired. One more party to host, and then the weekend will become one of those memories I call upon when I miss Courtney.

This past weekend I made a decision I never thought I would make. As a matter of fact, if anyone had asked me three months ago if I would have made this decision I would have said no. I am still second guessing myself, but at the point it is too late. My decision; I let Alex miss Courtney’s graduation.

The State Special Olympic Games are held the first weekend of June every year. This year Team CO has a special role in the opening Ceremonies. The team will be walking in together and receive the “official” send off from the summer athletes. Alex will be able to touch base with her coach and get some final training instructions for the five weeks between the State and National Games. And then there’s the matter of the dance….the only real opportunity Alex has to be in a larger social situation with people like her; a time for her to shine. I did not want her to miss this.

I thought, rethought and over thought this absence from Courtney’s weekend. John did not waver from his decision to let Alex go; I did. Courtney was sad, Alex was sad and I was sad, but Alex went. Actually Alex wanted to go, although she was torn and asked Courtney at least a million times if she minded. Courtney, always gracious and kind (except when she is not) insisted Alex go. The decision was made.

Luckily, the grandmas arrived two days before graduation; Alex did not leave until the day before. At Courtney and Tom’s school graduation is a two day event. The first day the seniors present their senior projects. Courtney’s had something to do with DNA, RNAi, bacteria and other science stuff that is beyond me. It was an excellent presentation and Courtney was great. Alex was able to attend along with the grandmas; I felt slightly redeemed.

The second day is the actual ceremony, which Alex missed. Courtney received two awards at graduation; the academic and community awards, representing leadership and integrity in both areas. This is a huge honor, and is only rarely bestowed on the same recipient. Once again, I could not have been prouder, yet sad Alex missed this. She would have been beaming with pride and everyone in the audience would have heard Alex’s squeal of delight “that’s my sister”. The ceremony was recorded, so Alex will have the chance to squeal as often as she likes.

Alex has called at least ten times. She has the great skill of calling and calling and calling until I answer the phone. Being at a graduation ceremony or trying to take a brief rest between events does not deter her. If I do not answer the phone on the first call she will call again and again. I have the ability to send a quick test to a caller in order to let them know I cannot answer the phone. Alex’s response to these quick texts… a phone message demanding I call her back and quit texting her. I laugh at her persistence.

Alex will arrive home this evening. I am hoping she will be beaming from the weekend, medals in hand, stories of the dance, and excited about Team CO. I am also hoping I will feel vindicated in my decision making abilities and all will be right with our family. Time will tell!