A year and sixteen days ago I was in South Korea watching Alex represent the United States of America in the World Winter Special Olympic Games. In honor of this life changing experience and this year Winter's Olympics in Sochi, Russia I am going to republish the posts about the Olympics.
*****************************************


Courtney graduated and Tom will graduate in June from Colorado Rocky Mountain School located in Carbondale, CO. CRMS is a boarding school and attracts students from all over the world and especially Asia. The school has been a driving force in all of our lives, with the opportunity to meet and host many international students.

One of our long time host sons is Jay from Seoul. Jay and Courtney were great buddies, and although he goes to school in the US - he is back in Korea fulfilling his mandatory 21 months in the military. We met Jay's family at CRMS graduation in 2011. They are gracious and kind and expressed their thanks many times for sharing our home with Jay, to me he is our second son. In our world of good karma we were able to spend time with Jay and his family today when they came to watch Alex ski.

Wanting to do well for her fans was storm number one. 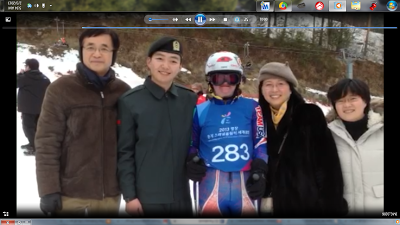 Storm number two was Alex's ranking, once again her previous times put her in another competitive heat and she was the seventh best of eight skiers in her flight. Today was The Giant Slalom (click to watch the video) , which is one of Alex's stronger races. Her times were decent and she certainly looked great, but she was unable to make it past fifth place. 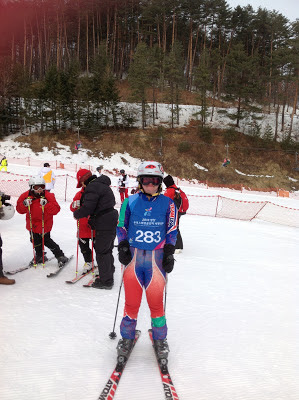 And storm  number 3 is something we girls all experience, the hormonal imbalance caused by that monthly thing ..and Alex's month started today. Alex's coaches have worked very hard with her on good sportsmanship and competing not to win, but to try your hardest. This has been a tough lesson for Alex as she always wants to win. She is competitive, but she also does not want to let other people down.

Today Alex stood on the podium and received a ribbon for 5th place, out of eight. She skied her hardest. looked great, but has meet her match competing against the best skiers in the world. 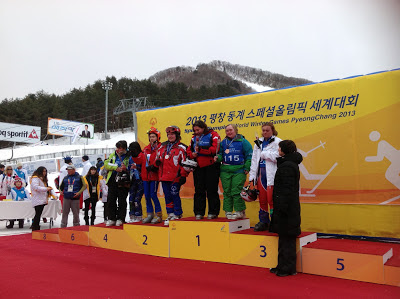 I do not condone bad sportsmanship, but my heart melts when I see the look of disappointment and the holding back of tears on my daughter's face. Alex cried for a good 20 minutes, her coaches took it in stride and her good friend Jay, her Korean brother was able to get her to smile again. 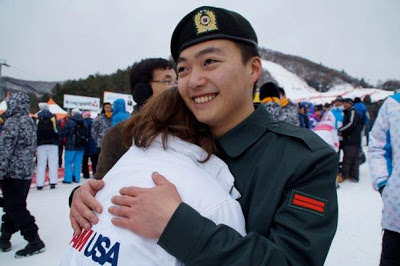 Today was that perfect storm, but it was a good storm. Alex had another great race and hopefully learned a little more about good sportsmanship. We were able to visit with Jay, his parents and his aunt a half a world away from Colorado. It was a great day, one I would never have imagined even a year ago.