In the Special Olympics all athletes are given the opportunity to compete in the medal races. Here in South Korea the heats are decided the day before the race through a divisioning run. In the past Alex has always tried her hardest in the divisioning runs and manages to put herself in the finals race with the more competitive athletes. 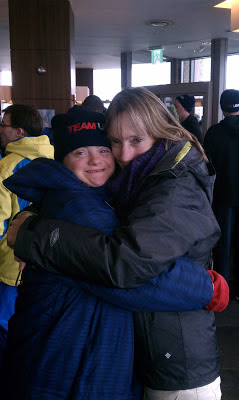 Alex’s first race  was the Super G, an event she usually she does not race. In the Super G the racers tuck their poles and ski as fast as they can around the gates. Alex prefers the Giant Slalom and the Slalom as she can use her poles to plant and turn. The Super G was scheduled for yesterday, but due to rain the event was rescheduled for today.

Alex had a great time, but was 6 seconds behind an athlete from South Korea, which put her in second place. Needless to say we were all whooping and cheering proudly for Alex. The awards ceremony usually take a little time to queue up, it was not until about 30 minutes later we saw Alex go up to the podium. As she stepped on to the second place step I could see the sadness in her face. My wonderful happy daughter has inherited one of my worst traits – she is about as competitive as they come. She felt she had let down her friends at home who had told her to “bring home the gold”. 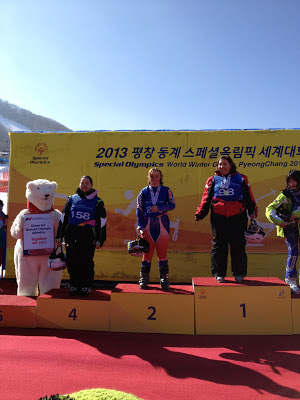 Alex did recover quickly with all the congrats and hugging that went on after the ceremony. She explained the Super G was not her event and she would do great in the GS. I think it was the interview we did for the Polish TV Station that put her back on track. If anyone watches Polish TV, be sure to look for Alex and me! 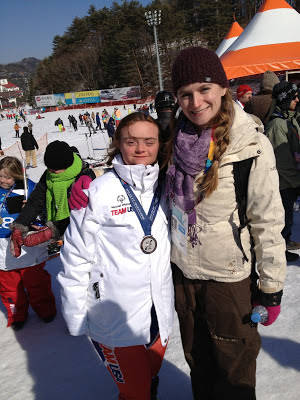 The divisioning for this race did not occur due to the rain delay, so tomorrow’s divisions were determined from today’s races. Funny how that works, a certain South Korean who skies much faster than Alex has moved up to a different division. I know Alex will race her hardest and will learn that is is the effort that counts. not the color of the medal.

We were able to spend dinner with Alex, she has matured so much in these last eight days. She talked non-stop and shared about the US military base the Team visited, lunch with the US Ambassador and the kindergarten visit. She shared stories of her new friends and joked about her coaches. She shared about the Healthy Athletes initiative the Special Olympics is rolling out, it provides health assessments and screenings including eyes and ear examinations. For the first time, Alex failed her eye exam and glasses were made for her on the spot…..and she even wore them!

When were returned Alex to her coaches I felt an amazing sense of gratitude. How could I have imagined almost 20 years ago that our lives would turn out like this….in a country so far from our own, cheering on a young lady who just happens to have down syndrome who is living her life to the fullest. What else could a Mom ask for any of her kids? 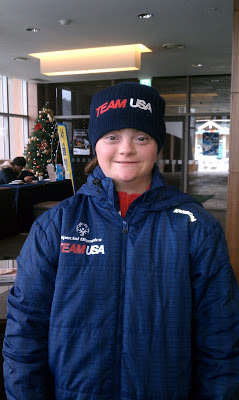