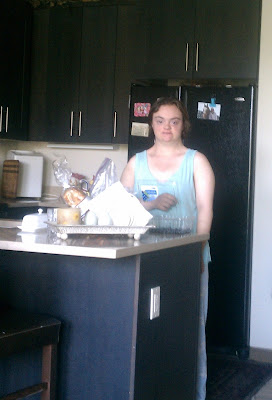 Alex lives her life vicariously through the Disney Channel. On any given day she wants to be Miley Cyrus, Selena Gomez or any of the other beautiful girls who live fabulous lives in a perfect world.

In many ways this is part of growing up in America as a teenage girl. I remember as a young girl in a pre-Disney Channel world, I had many role models, although most of them were athletes or characters on Star Trek. I believe one of the differences between me and my amazing daughter is how we invest in our role models. This may be a completely generational thing, having nothing to do with that extra chromosome but I recognize I will never be Captain Kirk, Alex still holds the belief she can live the life depicted on Zoe 101.

Alex becomes non-compliant  when her life does not play out like the Wizards on Waverly Place starlets. She does not get invited to "cool" parties nor does she have a boyfriend who is the star of the football team. As a result, I believe, Alex acts out and refuses to wear cute clothes or make-up. This passive aggressive behavior compensates for her realization that she will not live that life, and in the end not be disappointed. Role models are important, but it is how we respond to them that makes the difference.

This week Alex has adopted a new role model, Me. No, I am not young and beautiful with perfect hair, nails and toenails. I do not dress impeccably, live in a big beautiful house, have a 2012 luxury SUV or a swimming pool in my back yard. Rather, I am.....well never mind.

Alex has decided to emulate me for one reason only, the sin of self-indulgence she learned from me last week. This past week I had yet another birthday and after sitting on the pity pot I declared it was my birthday week and Alex had to do everything I told her. Funny thing is - it worked! Alex exercised, ate healthy and stopped buying music in the Itunes store on my credit card.

Today the tables have turned, Alex's birthday is tomorrow, and all weekend I heard "Mom, Monday starts my birthday week". I know I deserved and will respect Alex's self indulgence, I said the same thing just a few short days ago. So far I  do not know what this means beyond our pool day today, but I am sure it will be quite interesting.

So the question is - Who is the better role model, me or a Disney starlet? - only time will tell!