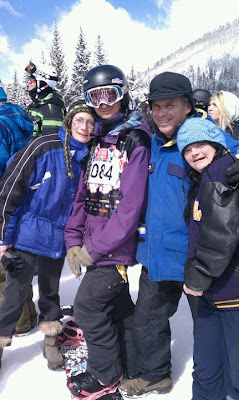 Although this is Alex’s story, it is also the story of John, Courtney, Tom, Alex and me. Everything Alex accomplishes touches all five of us. Every time she needs assistance or encouragement one of us is involved. We are not only a family of five; we are the family with the child with down syndrome. In the beginning this used to really freak me out, but that went away within a few months of Alex’s birth. Today, we are just a family, similar yet different from millions of families across the world.

As the mother of three children it is often difficult for me to give each child equal time. I have never heard “you spend too much time with Alex” from my other kids, but in my mind I focus on Alex a lot. I guess I have convinced myself Courtney and Tom are capable and strong young adults, who I guide but not micro manage. With Alex I micro manage. "Taking Charge", the self advocacy course Alex is participating in has taught me something too. I must hand over the reins to Alex, just like I have with my other kids. I am certainly willing to do this, but sometimes it is quite hard.

Recently Tom was invited to participate in the Nationals for snowboarding, specifically the half pipe, being held at Copper Mountain. Tom was proud, we were proud and Alex was proud. She was so proud she was overcome with delight and pure happiness of Tom’s success, her smile didn't let up for days.

As expected, we made a big deal out of the competition and even allowed Alex to miss school. She was so amused by her truancy she chuckled about it for a week. I was so excited to attend an event that was all about Tom, the brother and son. Alex was merely a spectator in the happening, an observer and a supporter, or so I thought.

Enclosed is the letter I wrote to customer service the evening of our return:

I’d like to make you aware of a very unpleasant experience I had today, April 4th at Cooper Mountain. I am hoping that because of our unfortunate experience you could train your ski patrol, customer service and particularly ticket agents. I believe the Manager I spoke with in ticket sales was named xxxxx.

My son competed in the USASA half pipe today. We live in Carbondale and I came over on Saturday with my son, my husband and 17 year old daughter Alex arrived this morning to watch our son. My daughter is very familiar with Copper and she competes in the State Special Olympic Games every year. We have always found it friendly and hospitable, until today.

As the HP was so close my husband and I were fine with the walk. However, my daughter has a broken foot and Down syndrome and the walk made her nervous. She is in a walking boot and by doctor recommendation is fine to participate in walking, skiing, swimming and almost all activities. She wears the boot in case someone knocks into her by mistake. I went over to ski patrol assuming it would be easy for someone to take her up to the HP viewing area on a snowmobile. The ski patrol said they would not take her to the HP– it was against their policy, and I had to go buy a snow cat ticket or walk. I then went to the ticket sales and was told the snow cat would not take her to HP because it does not go there.

The agent was rather rude and I asked to speak with the Manager, once again I was told – this is against policy. I asked if he was familiar with section 504 of the American with Disabilities Act – he was not and when I suggested he was in noncompliance he again told me it was against policy. As far as I am concerned any place that is accessible to an able bodied person has also to be accessible to a person with disabilities, and in this case my daughter has two disabilities. I asked to speak to his Supervisor and he said he was it – there was no one else I could speak with.

I was so distraught by this time; I had already missed one of my son’s teammates run and was at risk of missing my son’s run. I ran to the top of the pipe viewing area and barely saw him – then I had to run back down to get my daughter. My daughter was crying because she had missed her brother, she had missed school and driven two hours for this terrible experience. I believe she is owed an apology.

At this point my husband went to your administrative office and asked to speak to the person in charge, after getting the same run around I did at ski patrol and ticket sales. I will not name names, for fear you will penalize the very helpful person that got a ski patrol person to take my daughter to the HP so she could watch her brother’s second run. These folks did the right thing and should be applauded. This effort took over an hour and a half. This should have been Copper Mountain’s first response…not the last.

As I said, I have been to Copper a few times, and my son likes to come to Woodward. This was a painful and upsetting day for us. Not only were your agents rude and unbending, showing a complete lack of what customer service is about, your policies are out of date. At this time I would never suggest to anyone I know to ski or snowboard at Copper again. I will not return until you have rectified this situation.

I would appreciate a response as well as your assurances your staff will be trained so no other person with a disability will have to suffer the injustice my daughter did today. There are laws to protect people like my daughter – please follow them.

Okay, so I do not know whether or not I misquoted the law, nor do I care. I also do not play the down syndrome card unless I have no other options. Alex is perfectly capable of doing everything an abled bodied person can, most of the time. Lately, as Alex has gotten older, people seem to respond to my encouragement of following the law, than my once very successful, “let’s do the right thing” approach. Once again, expect the best and modify as needed, has become an important part of my life.

In Copper’s defense I got a response first thing the next morning assuring me the incident would be investigated and someone would get back to me in a couple of days. Well, to me a couple is two or three; we are now on day five. I hope they respond, and restore my sense of fairness that is currently severely compromised.

But the shame of the whole day, the sin that should never have occurred, is that the day became about Alex, not Tom. As always Tom was gracious and boarded down to see Alex right after his run. He hugged her and assured her she did not miss anything, that his run had been bad. This was not the case; Tom had a good run, but could not bear to have his sister disappointed. That is who my children are, three kids who care about each other so deeply they can put aside personal agendas to support each other. Well, at least some of the time!

Tom, you are a super star.