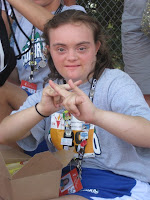 It was the first day of qualifying events and Alex ran the 200 meter and threw the shot put. We got to the stadium in time for the race. There were eight of us; John, Tom, my Mother and her husband Tom, Christine from Chicago, Molly and Jeff from Colorado and me.
Courtney was not with us, she was one of 11,000 people who volunteered for 8, 000 positions, so only got a two day shift. Imagine being over subscribed for volunteers by almost 38%, this is surely an example of the power of the Special Olympics.

The 200 meter race is not Alex's strongest event; she tends to slow down at the end of the race as she does not quite understand pacing. There were at least seven heats; Alex was in the fifth. She had five girls in her race and she came in third. Not only is third a great place for her, she had her best time ever by at least 8 seconds. It was a battle to the finish line for second and third place; Alex pushing herself as hard as she could to pass her competitor, but was beaten by only one step.

The shot put event also had a large number of heats and once again Alex beat her best throw. Alex is a competitor at heart and understands the spirit of competition that all athletes feel. She wants to win just as much as anyone and for today’s events she gave it her all.

I misunderstood the qualification process at these games. All athletes will compete in the finals; these qualifying days are for division placement only. This means all the athletes will get a medal or a ribbon. This is one of the many things that make the Special Olympics so extraordinary; everyone is rewarded for hard work and fair play.

We were able to spend some time with Alex today in-between events. She has grown up over night. No longer was she the 17 year old teenager we put on the bus Saturday morning. She was a confident and proud athlete. She looked different to me; older, taller and fulfilled. It is an incredible metamorphis; the butterfly analogy is right on.

Tonight at dinner it hit me; I miss Alex. Here we are in Lincoln, NE with our family and friends celebrating Alex, but she is not with us. We are having fun; we have biked, swam at a local lake; partied with family and friends and watched spectacular sporting events, all without Alex.

Alex is having dinner with her team and 3,600 other athletes from across the country. She will go to sleep in her dorm room with her roommate. She will take a shower, set her alarm and get up tomorrow morning, all without me there.

Where is my little girl? Just like Courtney who can to wait to leave the house and go off to college, Alex has also graduated to another level. She too will know independence and life away. This is what I have always imagined for my extraordinary daughter with down syndrome, but so soon? Lucky me, Alex will return home, different, but still Alex.