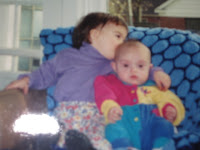 Courtney is 18, almost grown up but in my heart still my baby. She was our first born, the daughter we waited two years for and worth every second of our wait. She talked early, walked late and smiled nonstop.
My oldest was an easy baby, which prompted us to try for our second when she was six months old. Alex was born nine months later and our lives, especially Courtney’s were changed forever. I believe this change in direction has been for the better.
Courtney loved her little sister; she helped with the diaper changes and the feedings. She hugged and kissed Alex often. Courtney loved having a sister, and showed her off often. In those first years, Alex was just like any other sister. Her delays were minimal; she was happy, smiled and loved her sister back.

By the time Courtney was four, she knew Alex was different. Courtney went to nursery school, and Alex went to therapies, which included speech as well as her early intervention program. I tried as hard as I could to spend an equal amount of time with the girls. Courtney had play dates, dance classes, swim lessons and all the activities a four year old could want. In some ways, I may have over compensated, but I do not believe this was a bad thing for Courtney, Alex or me.

Tom was born when Courtney was 3 ½, and Alex 2 ¼, so part of those early years have become a blur. Alex and Courtney loved their little brother, and he was everything a baby boy could be. He was loud, loved trucks and dirt and climbed everything. On the outside we looked like a normal young family, and in many ways we were.We were different though than our peers, we had a child with down syndrome.

Courtney started kindergarten, and was identified as a quick learner. She went into the accelerated classes for math and reading. She made lots of friends and was one of those kids the teachers love. This has not changed.

Alex started kindergarten and was classified as a special ed learner, she was pulled out for services, and as she progressed through the grades her time away from the regular education classroom increased. The difference between the girls also increased and dramatically. Tom was like Courtney, but as a boy his interests were so different it confused me, and still does.

I digress, in this entry I want to write about sisters; to talk about Courtney and her sister. A relationship I have just started to understand.

I have three sisters, and I know the bond between sisters can be a very special thing. Granted we fought as kids, and still fight, but these women are as much a part of me as my own children. We come from the same place, and understand and care for each other more than anything else in the world. For example, when my 45 year old sister had a baby this past January, we all made fun of her, but celebrated this new and miraculous addition to our family with joy and happiness. Sisters are special.

When I was little I had always assumed I would have a couple of girls and a couple of boys. I wanted my children to have siblings, just like I had. I knew the second Alex was born that Courtney would never have this opportunity in her life. I grieved for Courtney and the sister relationship I thought she she would never have. I projected my expectations on a 15 month old, in retrospect a very unnecessary usage of my insomnia.

Courtney’s relationship with her sister will always be different, yet similiar. It is not one of inequality or resentment, but one of love and caring, just like the one I have with my sisters. Courtney loves her sister and respects her. She accepts her for who she is and I know will always care for her.

Alex in turn idolizes her sister, but in many ways I feel Alex resents Courtney. Alex knows she is different; recognizes she will not drive like Courtney. Perhaps not even go to college, and certainly not have a boyfriend or movie date until she is older. It is not Courtney I should have spent all those sleepless nights thinking about; rather Alex.

This emotion plays out in our house often; Alex’s reaction to unpleasant events in her life, or frustrations is temper tantrums. She will tell us often she hates Courtney, run up to her room and slam the door. The loud music goes on, and generally we leave her alone. Courtney understands Alex’s behaviors and often we share a secret laugh, knowing Alex will get over her anger by dinner time.

As part of Courtney’s high school curriculum, the seniors have an independent project, they pick something they are interested in, and spend 2 ½ weeks working on it. Courtney is a science kid, and is currently working in a DNA Lab in Cold Spring Harbor, Long Island. She has been gone for ten days and will return next weekend.

Alex (and Tom) have enjoyed this break from Courtney. She is a powerful force in our house, particularly as she reminds us of her impending independence and leaving us forever to go to college. I have not enjoyed this break; it is only reinforcing to me how much I will miss Courtney next year. However, both kids have gotten more attention, and the house is much quieter.

For the first few days Courtney was gone, Alex shared her joy in having the house to herself. This made me a bit sad, as I miss Courtney so much. However, for Alex’s sake it was nice to have her as the oldest in the house. She has been more independent and responsible since Courtney has been gone. I’m sure my siblings felt the same way when I went to college.

It took nine days, with my guilt about unfilled sister relationships reborn and my concern about my family relived in the early hours of the morning, but my worrying has been appeased. Alex came down the steps for breakfast on the ninth day of Courtney’s absence, a bit teary eyed and declared “I miss Courtney”. As is Alex's style this sentiment as been repeated daily, at this point almost too much!

I have learned, I do not need to wish my sister relationships on Courtney and Alex. They have their own, just as loyal, just as loving, and just as caring as any sisters. So what did I worry? Part of the job I guess, perhaps I should channel this worrying behavior into finding a new job!