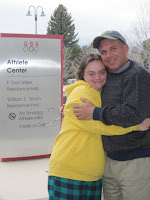 Yesterday, John’s 50 something birthday, we dropped Alex off at the Olympic Training Facility in Colorado Springs. We will not see her until tomorrow afternoon, and in fact cannot see her.
Alex spent all week packing, and I thought, or should I say assumed, she was excited. However, Alex manifested this excitement in a way that took me completely by surprise. She acted out at school.

On Monday, I got an e-mail from her aide saying she would not go to math class. She got into “stubborn” matches with her teachers, and as anyone with a child with down syndrome knows; these can be very difficult. It took the direct intervention of the principal to get Alex to participate.

On Tuesday, I got a call from the school nurse. Alex had been in the office complaining about her right ankle. Although the nurse did not see any swelling she suggested I take Alex to the doctor. Alex has had a number of “injuries” this year. Both the nurse and I know Alex has used these injuries to compensate for other difficulties in her life. However with the Olympic training coming up I agreed.

On Wednesday, Alex’s soccer coach called to say Alex had been late for practice all week and complaining about her ankle. Alex had a game that day; John went and said she ran up and down the field and did not seem to have any problem with her ankle

On Thursday, I took Alex to the doctor. Her ankle was fine.

On Friday, we got the weekly e-mail from Alex’s team confirming what we had been hearing all week. Alex has been preoccupied and needed extra prompting all week. As well as a convenient ankle injury, Alex has become hard of hearing. She told her teachers all week that she could not hear. They spent the week repeating everything to Alex.

When we approached Alex, she shared she was nervous about meeting the Olympic team and couldn’t concentrate all week. As far as I can remember, Alex has never been nervous about anything. She has never even used the word nervous before. Alex loves new adventures and never wavers in her excitement. Nervousness is a new emotion for her; vocalizing this fear is even newer.

In retrospect, this has been a very interesting week for me in a number of ways; the bad house, the bad job and the bad daughter. But there were also good things this week; both Alex and I grew. I learned two new things.

First, and most importantly, Alex has reached a new level of maturity. To me, being nervous means Alex has the realization of the Olympic Games event beyond the excitement of participating. Alex is thinking through and about the Olympic Games. She is recognizing this is a big honor and she wants to do well. She is learning about the fear of failure and the desire to succeed. I believe this is making her nervous.

Secondly, I learned something about myself this week. I have already girded myself for Courtney’s departure for college. I recognize I will be sad when I turn her over to strangers, and a new adventure in her life. But I had not even thought about Alex’s departure. Yesterday, I turned Alex over to strangers to start a new adventure in her life. Alex is becoming her own person; I learned, I am nervous, excited and proud.