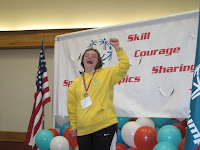 This past Sunday and Monday Alex happily partied at Cooper Mountain, the host of the State Winter Special Olympic Games. She danced, ate and hung out with friends she has met over the last few years of Special Olympic Activities.
Alex smiled for the cameramen and flirted with anyone with a y chromosome. She even got a free hot chocolate from Jimmy at the coffee stand. Her smile lit up the room; she was in her element.

As far as skiing, Alex sort of won two gold medals. I qualify this victory as there was one person in her slalom group and two in her grand slalom. Coach Paul and I did not learn about Alex's grouping until the first medal ceremony. I have mixed emotions about the medals; in some ways I do not feel she really deserved them.

I do appreciate the gold medals, but Alex also needs to learn about good sportsmanship and trying her hardest. At 16, gold medals are becoming secondary to the lessons Alex should learn as a competitor. I believe Alex needs to learn that second, third and fourth places are acceptable, and what counts is her participation. This lesson will serve her better as an adult.

I had thought (and hoped) we would learn this lesson in Alex’s first race. Each race consists of two runs; Alex had a very respectable first run, it even would have put her in medal contention with the older racers. Instead her competitor was 14, and the 17 year olds competed with the older athletes.

However, in her second run, Alex fell at the bottom. I was able to watch this tumble, which is quite unusual for Alex. She is a careful skier, and rarely gets out of control. In this case, at bottom of the race as she got in her tuck position to cross the blue line, her edge caught and she fell.

This left Alex about five feet before the finish line, splayed out with her skis off and poles scattered; we call this the garage sale position. It is actually a fairly amusing spectacle (assuming no one is hurt) and we usually get a chuckle out of this. Truth be told, my family gets a chuckle when I have the garage sale. Sometimes I can be very entertaining.

The time keepers, as well as Alex’s mother, were yelling at Alex to walk over the line; this would stop the clock. Alex needs a few extra seconds to process, and is very deliberate in her actions. Once she understood the directions, Alex picked up her skis and poles, and ran across the finish line. Truth be told again, Alex threw herself, her skis and her poles over the line.

The clock stopped (we estimate this cost her 45 seconds) and Alex ended up on her belly. She was immediately surrounded by at least three official; two of the male persuasion. I could tell immediately Alex was okay and milking her few seconds of fame as much as she could. Truth be told one more time, I cracked up; this whole scene was very funny to me!

Coach Paul talked to Alex on the way down the mountain. She was very upset with her performance and angry she would come in last place. He was able to get Alex to recognize that falls happen, and trying hard was the most important part. She partially regained her smile and seemed okay with her placement. Once again, I believe good sportsmanship is an important part of competing, and Alex needs to learn this; sulking should not be an option.

We went to the conference center to wait for Alex’s race results to be announced. I was prepared for 8th place (the number of girls in her heat) and ready to tell Alex the place did not matter, I was still proud of her. But in this case, my good intentions, and opportunity for positive reinforcement was thwarted. Alex was called up to the podium by herself and awarded the gold medal.

How that time deserved a gold medal is beyond me. But my daughter beamed with pride, and I was alright with our lost lesson; sometimes a proud daughter trumps other objectives.

The winter Olympics season is over and we move on to track and field. I believe this has been Alex’s best winter season so far. She did not argue with us about skiing, she participated in all of her practices and she improved. Most importantly she was happy!

This is my goal for each sports season; enjoyment, maturity growth and skills improvement. Perhaps we can learn about trying hard and good sportsmanship this spring. After all there are the Nationals to go to……