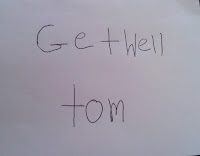 Tommy fell on his snowboard over the weekend. He bruised his ribs, and twisted his knee. Although scared and scary, he will live to snowboard again.
This necessitated Tom going home early, with me taking him. Alex was with her team practicing, so I arranged for a ride for her. Alex is genuinely a sweet and loyal sister, and she cried when the coach explained I left to take her hurt brother home.

I know Alex was upset about Tom getting hurt. But I also believe she is very adept at turning unhappy events into opportunities for herself. Tom’s injury helped her revel in extra attention from her team mates and coaches. I am sure she was able to milk this compassion as much as possible. Sometimes she can be quite the drama queen and I find myself saying “Enough, Alex”.

When Alex arrived home she told me she was going to make a card for Tom. I thought his was a very sweet idea, and since Alex loves to create artwork, it would keep her away from the Disney channel for an hour or so. However, once again my daughter had her own agenda in mind.

Tom - love you, and I like the hugs from you. Can I ask you something. I need you to wax my skis for me, to help me for I ski to state games to copper. I love you bro.

You always be my brother. I want to say feel better. I want to keep you in CO forever. You are best brother ever and you the coolest bro. Your sister Alex

Tom and I had a good chuckle over this overt request for assistance. Alex does need her skis waxed for the State Competition at the end of March. She has just spent the day skiing, and I’m sure she noticed her skis were slow. Was this good timing or what?

So, my questions are - Did Alex plan to ask Tom to wax her skis anyway? Was Tom’s injury the impetus that made her write the note and thus the favor? I know she loves her brother, and I do believe she was sincerely upset about his injury, but was she using this injury as her request for a favor?

The way Alex’s mind works is so fascinating to me. Sometimes her motivation and desire are crystal clear, and sometimes I am lost trying to figure out the connections she has made. Her long-term memory is phenomenal and she remembers so much that I do not. These memory bytes will show up often in her conversations. I feel she uses this ability to help her justify and rationalize events in her life. This injury and subsequent request to wax her skis will be part of her vernacular for weeks.

In any event, Tom will wax Alex’s skis; mission accomplished. Once again Alex has expressed herself in a clear, logical and legible manner. I am quite proud of her, whatever her motivation – sneaky or sincere!