A medal and a ribbon! 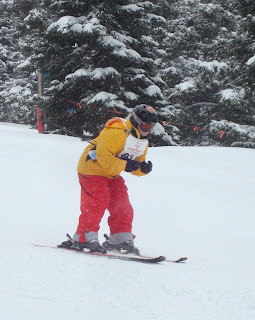 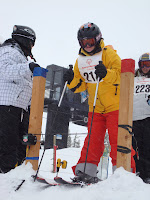 The past weekend Alex proudly represented the Roaring Fork Mountain Ninos in the Special Olympic Regional ski competition. This is the precursor to the State games that will be held at the end of march. Due to some scheduling conflicts, Alex was the only skier able to attend. A special thanks to our coaches, Cammi and Paul for working this out for Alex. She would have been devastated to miss the regionals and thus the States.

This was also one of those weekends where John and I had to divide and conquer. We are of that age where our friends’ kids are getting married. Crazy, but true. We were invited to a wedding in Austin, TX, and who could miss a trip to the great State of Texas, or God’s country as I learned? We tossed the proverbial coin and I went to Austin.

As I absolutely do not believe in coincidence anymore, the trip to Austin was another one of those serendipitous events that seem to happen in my life. There is a working ranch for people with disabilities located outside Austin. The ranch was started by a couple with a daughter with down syndrome looking for a suitable adult living facility for their daughter. Unable to find anything in the Austin area, they started Down Home Ranch. It is now a thriving ranch serving 20 permanent residents and many campers. I do not want to digress, but I was able to visit this ranch, and will talk more about it at some point. It was very cool!

John went to Leadville, CO, across a very windy mountain pass in a blizzard. Don’t tell Alex, but I am VERY glad John was driving, that kind of driving is not fun. As I understand it, the drive home was even worse.

Alex was entered in two events, the slalom and the grand slalom. I am not sure how many competitors were in her heat; she told me “lots”. Alex’s skiing has really improved this year and she got a fourth place in one event and a silver medal in the second. Once again, I am not sure of which event was which, I have heard both.

I returned home on Sunday evening, and walked in the door to a huge hug from Alex. She had her medal and her ribbon, and that huge smile on her face. The sense of pride she has from her results makes me proud. Alex wore the medal and ribbon to school today, I know she will get much accolades today. She will feel included and honored; something I wish for all my kids, all the time.

Ski season is not over, and based on the two feet of snow on my car last night, it will not be over for quite awhile. Alex will train for the next four weeks and anxiously anticipate the State games. I have already claimed this event as mine. I will take Alex to the Winter Games, rain, shine or blizzard; I will not miss this affair.

The Special Olympics really fill a huge void in the life of any child or adult with disabilities. Alex can play in the basketball, or soccer teams at her high school, but she will never be a shining athlete competing against “normal” kids. Some coaches will be great with her; include her and make her work. Some coaches will put up with her, and try to delegate her to the Manager’s position. I have yet to meet a coach that says no to Alex participating, and I think that is most likely against the law.

For Alex to truly succeed, and to feel that sense of pride that all athletes feel, she needs to compete with people similar to her. People who have disabilities, people who share her passion for sports, and people who work as hard as they can, despite their limitations, to succeed. This is what the Special Olympic teaches. It is an incredible organization.