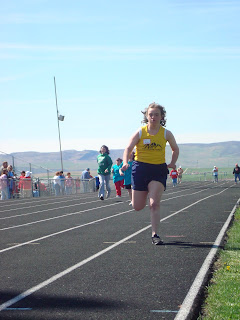 Since starting this journal I have been in tune with many articles and web sites about Down Syndrome. This phenomenon has not only infected me, but also my friends and family. I thank them for all the literature they have sent to me.

Before I commit the crime of unabashed plagarisim, I'd like to share the following excerpt from one of my first entries, “The day that rocked our world”:

I, we, were given the opportunity, and not through my own actions, to not have to make a decision that I would regret for the rest of my life. By having two "failed" prenatal tests I was never asked if I wanted to terminate my pregnancy. I never had to call my family and ask for advice over an early termination, and I never had to make a decision that would have prevented me from having Alex. Many, many women are faced with information that affects their pregnancies everyday. I do not condone or condemn any single person's decision relative to their own lives. I just know I am glad I never had to make that decision. Our family, our friends and the world would have possibly missed not meeting Alex - she has changed us all.

The following was in the Wall Street journal on Friday, November 27th. This writer describes my thoughts so well.


Sarah Palin and I have little in common politically. I disagree with her on foreign policy, economic policy and Roe v. Wade—I am a pro-choice Democrat.

But one thing Mrs. Palin and I share is that we're both parents of beautiful children who happen to have intellectual disabilities. And much as I disagree with Mrs. Palin on various political issues, I was struck when she talked about the cruel attacks on her son Trig in a TV interview last week.

What separates me from many other pro-choicers I encounter is that I strongly believe we need to make abortion rare. In too many quarters we have moved from a society that protects the right to abortion to one that promotes it. This is especially true with regard to those with disabilities.

I had a personal taste of this at a conference I recently attended for children with disabilities. An obstetrician told me excitedly about a new blood test that will allow pregnant women to discover if the child they are carrying has Down syndrome. The good news, he told me, is that we will no longer have to worry about "unfortunate births."

His doctor intended no offense. But his comment reflects a prevailing attitude that presumes we would all be better off if these children are eliminated before they are born.

I'll admit that my views are influenced by my 13-year-old daughter Molly, a vibrant child with her own dreams and personality. To us, she is not defined by her disability but by the joy she has brought into our lives.

I don't presume to tell others what to do when they are faced with these difficult decisions. But I worry that women who find themselves pregnant with a child who has a physical or mental disability get only one message, which is all about the burden about to be dumped in their laps. Today, nine out of 10 American women who are told they have a child with Down syndrome choose to abort. I think it's fair to say that if some of these potential parents had a glimpse of the other side they might have made a different decision.

Americans are said to be starkly divided on the issue of abortion. However, most people I know are somewhere in the middle. There are people who call themselves pro-life but will stand by a daughter who obtains an abortion. Others call themselves pro-choice but applaud the message of the movie "Juno," where a teenager brings her pregnancy to term so she can give the child to a loving couple.

Unfortunately, there is a another category of people who say they are pro-choice but ought to be characterized as aggressively pro-abortion. These are the people who heap venom and ridicule on Mrs. Palin for bringing Trig into the world. Their views should be troubling to all, especially people who want respect for a woman's right to choose.

At their most vulgar, these attacks are like Erik Sean Nelson's item on the Huffington Post this summer. "Palin to run in '12 on More Retardation Platform," screamed the headline. Mrs. Palin's policies, he wrote, "will increase jobs because Wal-Mart is building new stores each day and someone has to be a greeter." He added that she would achieve her goal of smaller government "because fewer Americans will have the cognitive ability to hold a government job."

Mr. Nelson, a comedy writer, later apologized and the Huffington Post removed the post. But it is just one example of the strong "eugenic overtones" that Gary Bauer and Daniel Allot in Politico found in much of the coverage of Trig Palin.

The American people are complicated. I know pro-lifers who have aborted when they found out their baby had Down syndrome. I know of a couple who are suing their doctor because amnio tests did not disclose that they would be having a baby with Down syndrome. And I know a woman who is strongly pro-choice but chose to keep her Down syndrome baby and couldn't be happier with her decision. I also know couples who choose to adopt children with Down syndrome and consider themselves blessed.

I have no magic answers. I do have a beautiful daughter who lights up my world when I look into her trusting little face, who enriches our family with her life, and whose big-heartedness brings out the best in those who know her. I sometimes wonder how many Americans deprive themselves of that same joy because of an aggressive message that abortion is the only sensible choice.

In my mind, President Bill Clinton had it about right when he called for abortion to be safe, legal and rare. If that is to be more than just a convenient political spin, we who support a woman's right to choose should do our part to celebrate the life side of choice.

However, I have come to realize that without Alex in our lives there would be a void. A void that I would not have realized. I have a story to tell, as do thousands of other families in the world.

I do not presume to make decisions for anyone. But I can ask - listen to our stories; learn about the magic of a child with down syndrome. Do not make rash decisions based on preconceived or uneducated opinions. Celebrate life.

I recognize in my celebration of Alex’s life, I have become an activist in so many ways. It is a badge I am thrilled to wear. Enough said.