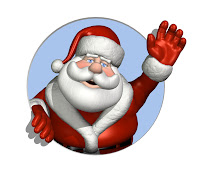 I learned something very interesting the other day...

I think Alex believes in Santa Claus. This really surprised me; Santa has not come to our house in almost seven years. We have a tree and presents under the tree - but everyone knows these presents are from Mom and Dad. I take the kids shopping, let them pick out a gift and put it under the tree for Christmas - pretty straight forward to me.

My new found knowledge is based on a recent trip Alex and I took to Wal-Mart. Wal-Mart is the closest real store to us, only 25 minutes away, practically next door. Although I had never been to a Wal-Mart before our move to rural CO, I now count myself as a regular. Ours has recently been remodeled and I really like it now...but I digress.

Alex and I were in search of last minute Christmas items; lights and poinsettias, to finish decorating the house. On this particular day, Santa was sitting smack in the middle of the store, enticing the little kids with candy canes. We walked past him and headed towards the decoration section.

I usually let Alex wander around while I shop, she headed to what I thought was the toy section. But that Santa was tricky, he enticed Alex too. On her return, she delightfully shared; "Mom, the real Santa is here, and he gave me two candy canes.” In my shopping frenzy, I did not really pay attention, just sort of nodded my head and continued on my quest. After all, how can a 16 year old believe in Santa Claus?

As we left Santa yelled; "Bye Alex, don't forget to pick-up your picture sitting on my lap at the photo lab".  For the next three days, Alex begged, pleaded and demanded that we go back to Wal-Mart to pick up (or should I say - purchase) the picture of Alex with the "real Santa". She was convinced he was the real McCoy.

I told myself - this will not happen, a 16 year old girl on Santa’s lap is just plain weird. I will not pay anything to memorialize this event. Thankfully, Alex has moved on to different pleadings, i.e. the I-pod touch demand. But this Santa thing is still confounding me. How can she possibly believe in Santa Claus?

I know that Alex does not believe that Santa comes to our house. She knows the presents she receives are from her parents, grandparents and assorted relatives. Does she think Santa goes to other people's house and ours is not acceptable to Santa anymore? Does she think there really is a Santa - but he does not dole out presents to big kids, just little kids? Just what is going on in that mind of hers? I am really intrigued by this Santa conviction.

I am not sure I will get to the bottom of this quandary by the time Christmas is over. Santa will go home to the North Pole to prepare for next Christmas, and I will not know why Alex believes. But, I did learn something; her sheer joy in the magic of Santa was infectious, innocent and peaceful. I wish that for all my kids.

Once again - I have learned something new from my remarkable daughter –  believing in magic keeps us young at heart. I like it!