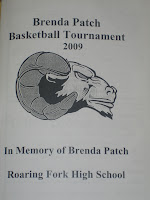 Every year the Brenda Patch basketball tournament heralds the beginning of the very exciting and very long basketball season. This weekend’s tournament involves about five Junior Varsity and Varsity boys and girls teams from across the Roaring Fork Valley and beyond. Beyond, in our little slice of the world, is about an hour away. Last year teams came from as far away as Steamboat – three hours, this year the teams are a bit more local. What we won’t do for a little excitement here in rural Colorado!

The first games were this evening and JV only, Alex’s first game! I have been looking forward to this all week, we need some distractions in our lives these days. The big varsity shooters will play Friday evening, and Alex's JV team will play again when the tournament concludes on Saturday.  We can look forward to three days of basketball!!

John and I rushed home from work, ate quickly and raced out the door for the 6:30 tip-off. We arrived at the host High School, paid our $5/each and entered into the excitement of the first evening of the tournament. So far so good. I felt that rush of energy I get at sporting events (except high school football).

Immediately on entering, we were faced with the purple jerseys of our Lady Longhorns. We looked around; saw all the girls shooting, but no Alex. My heart skipped a beat, I still get concerned when Alex is not where she is supposed to be. I fear that something has happened, she was forgotten or lost. A bit irrational at this point, I will work on this phobia in ten years or so, maybe.

I sighed with relief when Alex ran (walked quickly) over to us, but she was in her street clothes. Street clothes - what the heck is going on? Turns out - Alex had "ditched" practice on Tuesday and was not allowed to suit up. Tonight she was a spectator. What is this - is this fair?

Alex did ditch practice on Tuesday. The coach had called John and told him Alex had missed practice, but there was no mention of missing the first game. When asked, Alex said she was so upset about Tim that she couldn’t get to practice. She opted to stay in her classroom. I asked if she explained this to the Coach, she told me she did not - the Coach was too busy to listen. I wish this had not happened.

Alex did go to practice on Wednesday, and when I picked her up she was crying. She said a boy had teased her, but I believe she is thinking about Tim. This boy is another special needs student and has been teasing her since school started. Seems to me to be a big coincidence that this day he bothered her so much she had to cry. I know she is heart broken and I do not know what to tell her.

John and I were so disappointed Alex was not playing we left. Call me a poor sport, but $10.00 and two hours of my time is not something I give up willingly. I am upset that neither the coach nor Alex's teacher had called us. I do preach that Alex should be treated just like other kids, and certainly ditching practice is grounds for sitting out a game - but what about a little communication here? Could they not notice that she was so sad?

Perhaps I am at fault, maybe I should have called the coach and explained that Alex was fragile. I think I secretly hope there should be two sets of rules for Alex, the "real" ones, and the ones we use when she needs a break. Sometimes, I just do not know.

I hope this is an aberration, just the growing pains of a new Coach. Alex’s basketball season last year was so successful, that I have spent the last ten months looking forward to this season. I want a repeat; a season where Alex is included, encouraged and part of a team.

Mama Bear is back; tomorrow it is phone calls to the Coach, Alex’s teacher and the Director of Athletics at the school. This really needs to work. Alex needs this distraction. We have had too many sorrows recently, we need some happiness.