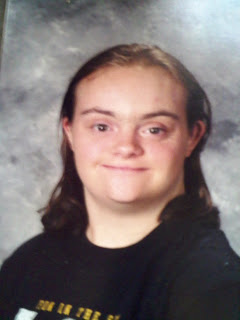 Speech has always been one our challenges, Alex’s and mine.

Speech is difficult for many people with down syndrome. I go back to the signing she did as an infant – she knows what she wants to say – but getting her thoughts to coordinate with her mouth can be tough. I think I speak okay (it is writing where I struggle), so my challenge has been exploring all avenues that would facilitate speech development for Alex.

I believe, the clearer the diction and the better constructed Alex’s sentences are - the less "prejudice" she will encounter in her life. I use prejudice here – because I do feel that in some cases language abilities are sub conscience indicators to others, of cognitive abilities.

What I really mean - if people understand Alex and she can hold her own in a conversation it will be assumed that she is bright. Now this may not be the case in all situations - but I feel if you start from a place of acceptance you will be better off in the long run.

Thus  - my quest for speech services from the beginning. We were very successful - or perhaps I should say - the school district was very well funded and Alex received 30 minutes a day of speech in both elementary and middle school. Alex's speech is clear and intelligible - I know this is because of the services she received.

Since our move to rural Colorado speech for Alex has consisted of - at the most - 30 minutes a week. Reinforcement with Alex is the key to maintaining her skill levels. Her speech is not as articulate at it was three years ago, and it pains me. I am constantly challenging the school and have almost reached my breaking point - watch out! This has been one of my biggest battles and is how I believe I earned the title of a b**** . Happy to say I wear this name proudly.

I will spend much more time on this subject as I make my way through the "Educating Alex" series, but as previously mentioned -thinking about this disservice to my daughter, and my inability to improve it, gets my stomach in knots and my head spinning.

Anyway, back to the point of this entry - Alex is very adept at compensating - something a very intuitive speech therapist helped her master. To this end, Alex has developed her own language expressions she uses when she is stuck. Most of these sayings are really good tactics to help her get her thoughts together. It gives her mind and mouth time to catch up. Unfortunately, though, I know some of these expressions are directly from the Disney channel. Maybe I should have exposed her to Broadway, or Star Trek when she was younger - at least the sayings would be more pertinent to me.

Mostly, however, I find humor in her remarks and comments. I really am impressed that she has this coping skill. I think it is worth sharing some of these comments – perhaps I should use then in my daily interactions too.

And my personal favorite - that happens whenever I take Alex out to dinner or the movies:
This is only the tip of the iceberg - Alex has a response for everything - she makes us laugh and she makes us cry.  I guess I would say there is never a dull moment in Alex’s life.