The day that rocked our world 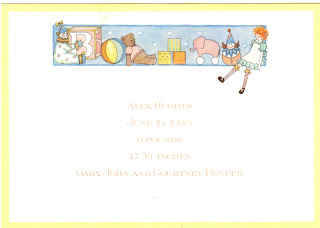 Alex was born on Saturday, June 19, 1993 the day after we saw Miss Siagon at a Chicago theater. I am sure there are some metaphors, analogies and other symbolic references to be made in this sequence of events - but for now I refrain.

When Alex was born her umbilical cord was wrapped around her neck and she was blue. Her apgar scores were low, so after a brief introduction she was taken to the neo-natal intensive care unit. The doctor assured us Alex would be fine - but when I asked the nurse after the delivery if there was something wrong she hesitated before trying to comfort us.

To this day I believe that when Alex was delivered the nurse recognized right away that she had down syndrome, the doctor did not. The doctor had read my chart and saw the results of the prenatal tests I had taken suggesting we were having a "normal" baby. I now know that "normal" is an extremely, mis-used and incorrectly defined word when used in conjunction with babies and children.

I was 34 when I delivered my first daughter, Courtney, who is also extraordinary, and genetically correct. Since, Alex is only 15 months younger, I was in the "risky" age area, and it was suggested that I undergo genetic testing. I agreed to the CVS test which can be done very early in the pregnancy. In this test, a needle is unceremoniously placed in a very uncomfortable part of one's anatomy in search of fetal cells. By culturing these cells the geneticist are able to count the baby's chromosomes, as well as look for other genetic markers. I am not sure of the failure rate but it is at least one in 10,000 - I was the one.

Next, the Doctor suggested I do an amnio - this is done later in the pregnancy when you can feel the baby alive and kicking in your womb. As a needle was unceremoniously being inserted in my abdomen I mentioned to the Doctor that I was on the way to the airport. He pulled the needle and refused to do the test. Apparently, the hole that would be created in the amniotic sac has a greater chance of rupturing in the low pressure of an airplane. Instead he did a full ultra sound and declared everything to be perfect.

So that gets me back to the delivery - I could sense almost immediately from the nurse that something was not right. John helped me to gather myself together and shuffle down to the NICU (for those of you that have given birth - shuffle is the correct term). I had a knot in my stomach but did not want to alarm John . I asked to see the doctor and what blurted out of my mouth surprised even me. I asked "Do you suspect down syndrome?" and the reply was a simple "maybe, we need to do a blood test and the results take three days".

As they say, the rest is history and the ensuing days, weeks, months and years I will share with you at some point. However, I do want to share something now.

I, we, were given the opportunity, and not through my own actions, to not have to make a decision that I would regret for the rest of my life. By having two "failed" prenatal tests I was never asked if I wanted to terminate my pregnancy. I never had to call my family and ask for advice over an early termination, and I never had to make a decision that would have prevented me from having Alex. Many, many women are faced with information that affects their pregnancies everyday. I do not condone or condemn any single person's decision relative to their own lives. I just know I am glad I never had to make that decision. Our family, our friends and the world would have possibly missed not meeting Alex - she has changed us all. I also know there are metaphors, analogies and other symbolic references to be made in that sequence of events.

Down Syndrome is technically called trisomy 21 - which means there is an extra chromosome in the 21st set of genes. It can come from either the father or mother, but most likely the mother. This gene "over codes" many of our attributes, including intelligence, muscle tone and physical features. We refer to Alex as extra special because she has more genetic material than us - but in my heart I know she is magic.